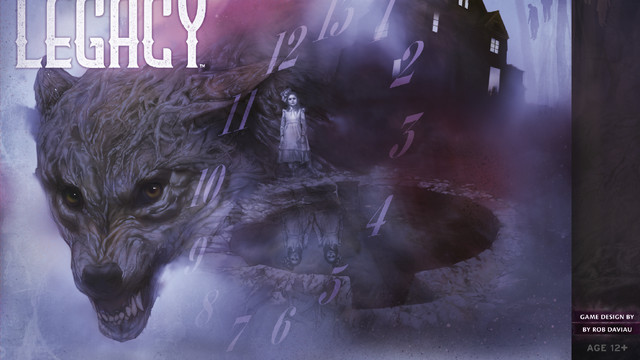 The popular series of Legacy board games continues this month with the release of Betrayal Legacy, published by Wizards of the Coast under the Avalon Hill imprint. For designer Rob Daviau, it’s a bit like coming home. He’s credited as the co-designer of the original Betrayal at House on the Hill, a cult classic board game about a haunted mansion, first released in 2004. Now he’s been invited back to apply the revolutionary Legacy system, which he created, to one of his first hit games. They even put his name right there on the box.

After playing through just a few games in its 13-session campaign, I can already tell that it’s going to be spectacular.

[Ed. note: This is a spoiler-free review.]

When I first met Daviau a decade ago, he was running around the Gen Con tabletop gaming convention with a handful of pre-production copies of Risk: Black Ops, a rare variant of the 1959 classic that now sells for a pretty penny on eBay. At the time he was in the middle of his Risk period, so to speak, working with the guts of the classic wargame like an artist might work with watercolor or pastels. While Black Ops never quite made it to production, many of the innovations and variants that Daviau designed later made it into Hasbro’s revised edition of Risk, published in 2008 and still on many store shelves today.

During that same period, Daviau was also formulating the game that would become Risk: Legacy, the precursor of what would become his biggest gift to the board game industry.

In Risk: Legacy, players actually change the game board itself each time they play. Each of the game’s factions also evolves and changes over time. Players use markers and pens to name continents, claiming bonuses for entire regions of the map. They tear up cards and apply stickers to the rulebook, literally changing how the game plays. It’s a diabolical engine for emergent storytelling, and a sure fire way to galvanize any group of avid wargamers in just a few sessions.

Later, that same Legacy system was applied to a newer game with the help of its designer, Matt Leacock. Called Pandemic Legacy: Season 1, it was hands down my pick as the best board game of 2015. Today, it’s widely considered one of the best tabletop games ever made.

In addition to altering, destroying, and adding to the game materials over time, Pandemic Legacy also introduced the so-called Legacy Deck. It’s a pile of pre-arranged cards that sits inside the box and acts as the narrator, introducing plot points and new variations to gameplay over time. In many ways it acts as the director, setting the pace of the experience and infusing it with tension.

If Risk: Legacy was a cheesy war movie, then Pandemic Legacy was a blockbuster summer thriller with all the twists and turns of a good spy movie and a disaster flick all rolled into one.

However, for various reasons, Daviau’s later efforts weren’t as successful as those first two titles. SeaFall: A Legacy Game had a very slow ramp-up to the action and a troubled end-game. Meanwhile, Pandemic Legacy: Season 2 lacked some of the drama that made the original so unforgettable.

With Betrayal Legacy, Daviau is clearly focusing more than ever on the narrative of the experience: the connection between the players at the table and the game’s narrator — the Legacy Deck — that lives inside the box.

At the moment, Avalon Hill appears to be in an experimental phase. It recently released Axis & Allies & Zombies, a reimagining of the classic World War II-themed wargame that works incredibly well. Two years ago it released an expansion for Betrayal at House on the Hill called Widow’s Walk which included input from a bewildering variety of well-known figures in game design and the entertainment industry. It’s no surprise, then, that the company would be eager to let Daviau have his way with their franchise.

In Betrayal, players move their pawns around the board, uncovering random rooms in a haunted mansion as they go. The tiles themselves drive the action of the game, prompting players to draw items and events from a few decks of cards. Every round they must roll dice and, if they fail to roll high enough, a so-called Haunt is triggered. Depending on the combination of the rooms uncovered, the items that the characters have in their possession, and the location of the various players in the house any one of 50 different Haunts begin. When that happens, at least one player takes a separate instruction manual into the next room. They become the Betrayer, and when play resumes, they spend the rest of the night trying to murder the other players.

The experience of playing traditional Betrayal, with or without the Widow’s Walk expansion, is janky as all hell. It’s effectively dozens of different mini-games all rolled up into one bargain priced package. But, because of its narrative momentum, the whole thing manages to hold together. You can drop a few rules, or mess something up, and the game is still incredibly fun because, as a storytelling engine alone, it’s second to none among board games.

It’s the perfect sort of playground for Daviau.

Inside the box of Betrayal Legacy, you’ll find a sheet of stickers and a giant piece of cardboard that looks like an abbreviated advent calendar. There’s also a few decks of cards for items and events, a collection of player pawns, stat trackers, and cardboard tokens. There’s also, of course, the Legacy Deck.

The gimmick here is that, rather than a random haunt, Daviau has seeded the Legacy Deck with a series of haunts intended to move the story of the House itself forward from generation to generation. Best of all, since he’s one of the game’s original designers, he’s had nearly 15 years to buff out the imperfections in the ruleset. Expect a smoother journey from haunt to haunt thanks to subtle refinements and clarifications to the game’s language.

Betrayal Legacy does an exceptional job of building identities for the players at the table. One of the first things that players will do is name the families that are represented by the cardboard stat trackers. The sticker sheet is then used to mark certain items and events in the game with an affinity or a bonus to particular families. Shuffled back into the box, they provide big payoffs in later games.

For instance, in an early game I picked up a crossbow, named it Witch’s Bane, and marked it with my family crest. Now, every time I pick up that weapon I’ll receive a bonus to using it. Those kinds of personal touches are all over.

Know that Betrayal Legacy plays with two to four players, and that it’s best with a full table. What’s fascinating, however, is that there’s always another “player” sitting alongside you. It’s the House itself, and it is definitely not on your side.

I won’t spoil it here, but the very first haunt makes it clear that the building itself is working against you. Daviau has made something malevolent, crafting a Legacy Deck that actively works to befuddle and endanger the players. It inspires the kind of sordid, blood-soaked tales that fans of horror movies would absolutely die to play out with their friends. Best of all, once you’re done with the 13-game campaign, the whole shebang is completely replayable, albeit as a regular, randomized version of Betrayal at House on the Hill.

I’m happy to say that after a few less than legendary releases, it feels like designer Rob Daviau is back on track. Betrayal Legacy is something special, and I highly recommend it.