Despite evidence to the contrary, Holmes and Watson isn’t as bad as you might suspect 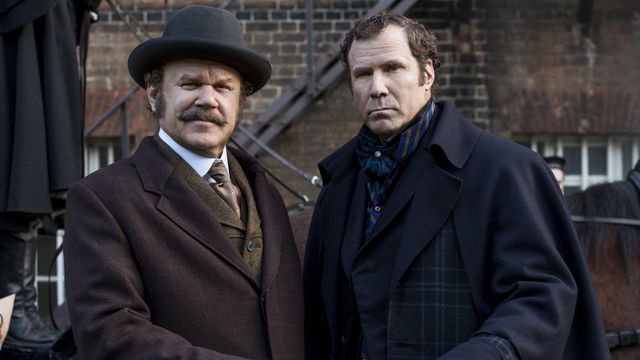 Maybe it’s just the holiday spirit, but I can’t find it in myself to be particularly frustrated by Holmes and Watson. Admittedly, it’s no Step Brothers, and I can’t help wishing for a more bizarre cut of the film (there’s an undercurrent of weirdness to the whole affair that feels somehow tempered), but if it feels a little elementary compared to the best of Will Ferrell and John C. Reilly’s work (the aforementioned Step Brothers, Talladega Nights: The Ballad of Ricky Bobby, etc.), that’s not necessarily a damning distinction.

That Ferrell and Reilly should take on Sherlock Holmes and John Watson, respectively, feels like a logical next step for the comedy duo, as they’ve made something of a speciality out of two-handers featuring Ferrell as the bright star and Reilly as the yearning sidekick. Granted, their particular spin on Arthur Conan Doyle’s most famous creations paints his legendarily brilliant pair as emotionally stunted morons, but the point still stands: There’s an archetype that the story fulfills that’s a perfect match.

What makes the film more than a retread, however, is also what makes it so unwieldy. As the detective and doctor work toward foiling an assassination attempt on the Queen (Pam Ferris) by none other than Professor Moriarty (Ralph Fiennes), the situations they find themselves in become increasingly bizarre. Part of it is to do with the fact that cracking the case is secondary to cracking open their hearts, and part of it is a seeming indecision as to exactly what Holmes and Watson is meant to be.

It’s not quite the absurdist art that Step Brothers is, nor entirely the political commentary of Talladega Nights (a sharper look at the Bush years than this year’s Vice, with all due apologies to Adam McKay); instead, it falls halfway in between, failing to make a completely coherent meal out of either approach. That said, if I had to wager (with the full acknowledgment that such speculation is meaningless), I would say that director Etan Cohen was trying for something more in line with the former, as there are bizarre interludes scattered throughout that suggest a much stranger film.

The best word to describe those moments is “grotesque,” as the film’s sense of humor goes beyond the usual scatological jokes — plus the requisite period comedy jabs at modern culture and technological advancements, and some laughs at the expense of previous iterations of Holmes and Watson — and ventures into genuinely strange territory. One scene, doubling down on Watson’s status as a sidekick rather than an equal, introduces something called the “companions’ room.” The roster of characters introduced there is so strange that their split-second appearance, a far cry from the triter set pieces that populate the rest of the film, is deeply jarring. Another gag spins fun out of the effects of poison, while the film’s opening sequence alone involves not only turtle rehabilitation but the coining of the term “un-crying.”

It’s that weirdness that makes the film’s big emotional payoff — which, amazingly, comes courtesy of Alan Menken and Glenn Slater — so fun when it finally kicks in. (The sequence is also shot more inventively than most of the rest of the film, though that’s neither here nor there.) But it doesn’t last long enough, or rather, it comes a little too early in the film out of necessity, as there’s still a Moriarty mystery to be solved.

And yes, Fiennes is largely wasted as Moriarty, but what he does get to do is so patently strange that it’s hard to put out of mind. The same goes for Kelly Macdonald as Mrs. Hudson, absolutely swimming in the river of ham, to the point that you almost forget to wonder what she’s doing in such a thankless role; Hugh Laurie as Mycroft Holmes, hinting at the glory of his Blackadder days; Rob Brydon as Lestrade, the requisite straight man who seems to have teleported in from another, better movie; and Steve Coogan as a one-armed tattoo artist, who very nearly steals the whole show with an elastic, easy-breezy performance that, naturally, is cut short a little too soon.

Rebecca Hall and Lauren Lapkus fare a little better in terms of screen time as Holmes and Watson’s respective love interests, though, ultimately, there’s not enough space in the movie for anybody but the leading men.

If, at times, it all feels like an overextended comedic bit, that’s because it is. Holmes and Watson is mostly an excuse for Ferrell and Reilly to fool around with British accents (which transcend being good or bad for how hard they lean into how ridiculous they know they sound — they still somehow sound better than a certain lamplighter) and point out how wild the past was (the film has multiple references to casual cocaine use). It doesn’t really matter that the case is impossible to solve independently, because it’s not the point of the story, and the film’s relatively thin construction isn’t so severe a crime when the actors can carry most of it off fairly well.

Reilly in particular brings a bona fide quality to an otherwise gormless Watson, digging into the sensitivity that served him so well in The Brothers Sisters to what are admittedly diminishing returns. But it still keeps Holmes and Watson from being completely disposable, and the same goes for the whole of the film: Though it doesn’t all quite hold together, there are enough inspired moments — and enough strangeness lying just below the film’s surface — that it doesn’t completely fall apart, either.