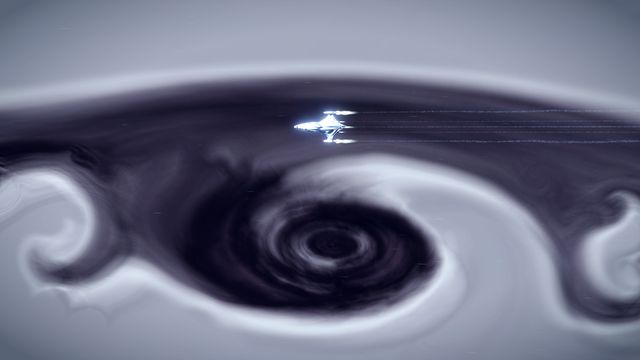 The Hull Seals save a commander caught in a neutron star, low on oxygen, and running out of time

Players are just over one month into Elite: Dangerous’ Distant Worlds 2 expedition, an 18-week test of endurance ferrying more than 13,000 players to the far side of the Milky Way Galaxy. So far there have been plenty of close calls and accidents, mostly involving botched landings and player-versus-player combat. But the fleet itself is proving to be incredibly resilient. There’s no better example than the dramatic rescue of Commander Proigr3 that took place over the weekend.

While attempting to supercharge their hyperspace drive in the Empyrean Straits region, more than 20,000 light years from Earth, Proigr3 lost control of their ship and suffered serious damage. Things got so bad inside the cockpit of the large, multi-role Asp Explorer that Priogr3’s glass canopy broke away, venting most of their oxygen into space.

With their heads-up display badly damaged, Proigr3 was left flying mostly blind while powerful magnetic forces from a neutron star buffeted them around. Somehow they were able to pull out of the star’s cone before the vessel itself was destroyed. Once on the outside, they discovered that they only had minutes of emergency oxygen left on hand.

That’s when Proigr3’s logged out of the game, jumped into the fleet’s Discord channel, and started calling for help.

In Elite, once a player dies, they return to the last starbase that they docked at. That can mean losing hours of progress and millions of in-game currency, in order to purchase a new ship. Worse still is the loss of exploration data, which can include new discoveries and potential points of interest for other players in the fleet.

Proigr3 first attempted to contact the Fuel Rats, famous in the world of Elite for bringing fuel to players stranded far from home. But this mission was beyond their capabilities. Instead, Proigr3’s case was referred to a newly-formed organization called the Hull Seals, an emergency repair team embedded within the fleet.

Over the next several hours, Commanders Dontus Killerinus, Rixxan, West-Tek, and Noodle-Impasta served as emergency dispatchers. They gathered up a group of 20 first-responders, each armed with top-tier mining equipment, who rushed to the scene. Scouts ranged ahead of the larger team, working to locate ringed planets in nearby systems with the right composition. Once identified, miners went to work blasting away at the materials needed to synthesize oxygen out of individual asteroids.

Once the mining operation was spooled up, the biggest challenge was getting Priogr3 to the right location before their oxygen ran out.

The architecture of Elite makes this sort of mission extremely dangerous. Simply getting everyone together in the same instance was a challenge, especially with Priogr3’s heart racing after the near-fatal accident. But dispatch calmly directed them to the correct system, and then helped them gather up the resources they needed to stay alive for the three-hour journey to safety.

The rescue came right down to the wire.

At one moment, Proigr3 had less than two minutes of emergency oxygen left. You can watch that clip below, which was captured by Commander DangerDan on Twitch.

DangerDan tells Polygon that this is only the second time that the Hull Seals and miners from the Distant Worlds 2 expedition, known as the Intergalactic Mining Union, have worked together on a rescue. Even more fun for the community as a whole, the volunteer DJs at Distant Radio kept the rest of the fleet informed with live news broadcasts of the rescue mission as it progressed. If you’re interested, you can watch the entire five-hour operation archive on Twitch.

The Distant Worlds 2 fleet is right now heading toward its sixth major waypoint. This leg of the journey takes the fleet across more than 10,000 light-years of uninhabited space on a route that cuts across three regions of the Milky Way. There likely won’t be another opportunity to dock for repairs for many weeks.

The fleet is expected to arrive en masse at the Dryau Awesomes this weekend. Once there, commanders will have to navigate a tricky star system to link up with other players. The system, formally known as Dryau Ausms KG-Y e3390, features a black hole locked in orbit with a white dwarf star. Complicating the arrival is a third planetary body, a massive gas giant with several small, landable moons.

With more challenging waypoints like that, the Hull Seals should have their hands full for the foreseeable future.