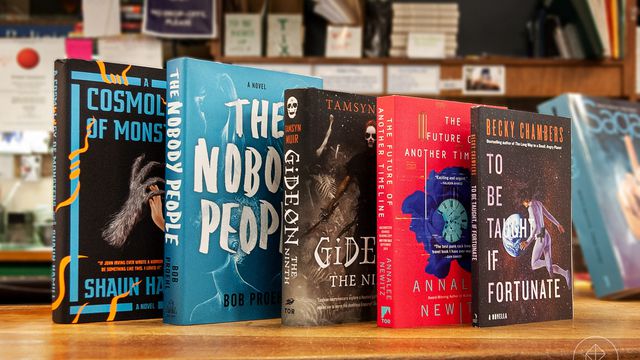 Strange tales of suspense to astonish you

The recent 50th anniversary of the Apollo 11 mission brought with it a glut of books about the history of the mission and space travel in general. I recently finished one of them, Oliver Morton’s The Moon: A History for the Future. It’s a stunning, beautifully-written account of not just the Apollo mission, but of the entire history of our relationship with the Moon.

Morton blends together cultural, economic, geologic, and military history to look at not only why we went to the Moon, but how we’ve looked at it over the millenia, how it was formed and impacted life on Earth, and what we might find when we eventually return.

George R.R. Martin’s fantasy epic Game of Thrones appealed to a huge audience because it had a lot going on: court politics, fantastical threats, parallels with the current climate change crisis, and epic battles. That latter topic appealed to a group of military theorists and commentators, who saw the warfare in Game of Thrones as a way to talk about modern day conflict.

The book is a sequel of sorts to Strategy Strikes Back: How Star Wars Explains Modern Military Conflict (disclaimer: I have an essay in that volume, but not this one), and examines things like civilians in the path of war, the importance of leadership in battle, and dragons as weapons of mass destruction.

To Be Taught, If Fortunate by Becky Chambers

Becky Chambers just earned a Hugo Award for her blisteringly optimistic Wayfarers trilogy, and coming off that win, she’s shifting gears with a new, standalone novella, To Be Taught, If Fortunate. In the 22nd century, scientists make a big breakthrough that will help astronauts adapt to the harsh realities of space, opening up distant destinations in the cosmos to human explorers.

One team of astronauts ventures out to a solar system 15 light years away, and as they transform and adapt to their new home, so too is Earth. Publishers Weekly gave the book a starred review, saying that “Chambers packs an immense amount of story into a novella worthy of full-length praise.”

If you’ve seen films like Jurassic Park, Mission Impossible or the first Spider-man, you’ve seen screenwriter David Koepp’s work. Cold Storage is his debut novel, and it has all the hallmarks of a thriller destined for Hollywood. (Paramount has already snapped up the film rights.) The novel follows Pentagon agent Roberto Diaz, who was once sent into the field to investigate a biochemical attack, only to discover that the organism in question could potentially wipe out humanity. Fortunately, he was able to secure it in a military facility.

Decades later, the weapon has found its way out. Aided by two reluctant security guards, he has to figure out how to contain it before it’s too late. Kirkus Reviews gave the book a starred review, saying that “Koepp is skilled at sharp, often humorous dialogue, and Roberto’s discovery of the physical barriers to being a hero at age 68 is both darkly funny and an effective source of suspense.”

The Nobody People by Bob Proehl

In Bob Proehl’s new novel The Nobody People (the first of a two-part series), individuals from around the world begin exhibiting special powers, including avi Hirsch’s daughter, Emmeline. And because they’re different, they’re singled out in society as a potential threat, helped along by the government as it passes discriminatory laws.

Calling themselves “Resonates”, they set up a school to learn how to control their powers, and Emmeline meets others like her. Together, they can push against the violence that’s directed at them. Publishers Weekly says that “what distinguishes this effort by Proehl from myriad other takes on this age-old trope is the book’s sharp, even uncomfortable awareness of the ways in which factors such as race, religion, and queerness would complicate and compound the bigotry such individuals face.”

The Testaments by Margaret Atwood

The Handmaid’s Tale is a classic of dystopian literature, and has continually been in the spotlight as a cautionary tale about the oppression of women. Hulu has adapted the book for an award-winning series, and Margaret Atwood has added to the story by way of a recent audio edition. Now, she’s adding a lot more: The Testaments picks up the story fifteen years after the end of The Handmaid’s Tale, following three female narrators from Gilead. The book has already been nominated for a major award: it’s on the longlist for the prestigious Man-Booker Prize.

The Ten Thousand Doors of January by Alix E. Harrow

Alix E. Harrow just won a Hugo Award for her story “A Witch’s Guide to Escape: A Practical Compendium of Portal Fantasies,” and continues to explore the world of portal fantasy with her debut novel The Ten Thousand Doors of January. While exploring the Vermont mansion of Cornelius Locke, January Scaller discovers a mysterious book and that with it, she has the power to open doors to other worlds.

She discovers that she has a strange connection with a character in the book, and aided by some friends, sets off to find her missing father and to learn about the strange worlds, Locke, and her own past. Kirkus Reviews calls the book “a love letter to imagination, adventure, the written word, and the power of many kinds of love.”

Gideon the Ninth by Tamsyn Muir

In this first installment of Tamsyn Muir’s debut trilogy, Gideon Nav was raised in the Ninth House, a noble house of a necromancer, trained as a fighter in a far-future solar system. But Gideon really doesn’t like this life: all she wants to do is escape to join the Imperial military. Instead, she finds herself picked to be the bodyguard and assistant to a necromancer adept and heir to the house, Harrowhark Nonagesimus, whom she despises.

The Emperor has summoned members of the other houses to compete n a series of trials that will pick the next immortal, all-powerful servant of the Resurrection. Publishers Weekly gave the book a starred review, noting that “this adventurous novel not only embraces its strangeness but wrings delight from it. The result is an addictive, genre-bending book that will wow readers with its vibrant energy, endearing cast, and emotional gut-punch of a finale.”

In the distant future, Cherub “Rubi” Whiting is a member of a generation that’s grown up after a series of ecological and economic collapses in the 21st century, who practices law and is an internationally renowned VR gamer. Her client is an accused terrorist named Luciano Pox, whose background is a mystery — they could be an AI, a hacker, or an alien. As Rubi takes on the case, she has to deal with her father, who’s trying to seek out a group of billionaires who vanished before the collapse, and a feud within the VR community. Kirkus Reviews calls the book a “cerebral fusion of science fiction, mystery and apocalyptic thriller — masterfully seasoned throughout with provocative social commentary.”

A Cosmology of Monsters by Shaun Hamill

Noah Turner comes from a family that can see monsters. His parents operate a horror attraction called The Wandering Dark, and have been subjected to strange visions over the years. Shaun Hamill weaves together family drama and their history with horrific monsters, as Noah tries to piece together their connection with the supernatural. Kirkus Reviews calls the book “an accomplished, macabre horror saga and a promising debut from an imaginative new author.”

A Trick of Light by Stan Lee and Kat Rosenfield

Stan Lee’s career is defined by the characters he helped create, from Spider-man to Iron Man, the list goes on and on. While he died late last year, one of his last projects is hitting stores this month. Originally published as an original audio drama in June, A Trick of Light follows Nia, a lonely, gifted hacker who finds refuge online as a youTube star. At the same time, vlogger Cameron is struck by lightning at Lake Erie while trying to uncover the truth behind a mystery, and discovers that he’s been imparted with fantastical powers over electronics and computers. When the two meet, they team up to right the wrongs that they see in the world.

The Chilling Effect by Valerie Valdes

In Valerie Valdes’ space opera The Chilling Effect, Captain Eva Innocente and the crew of her ship, the La Sirena Negra, must embark on a rescue mission when a criminal group known as The Fridge kidnaps her sister Mari and throws her into cryostasis. As she works to raise money to pay off the ransom, she encounters psychic cats, a vengeful emperor, and a budding romance between her and her ship’s engineer. Kirkus Reviews gave the book a starred review, saying that it’s “a tremendous good time and an impressive debut.”

The Future of Another Timeline by Annalee Newitz

io9 cofounder Annalee Newitz’s debut novel 2017 novel Autonomous was a sharp thriller about the future of biotech and patent piracy. She’s now back with her second book, The Future of Another Timeline, a feminist time travel story that starts in 1992 when a time traveller named Tess appears at a punk rock concert runs into a teenager named Beth, putting both of their lives into a path that could change the future. Tess is trying to subtly change the past to create a better future, all while trying to block a group known as the “Comstockers” from creating an oppressive future. Kirkus Reviews gave the book a starred review, saying that it’s “an ambitious adventure that keeps the surprises coming.”

Gary K. Wolfe is one of the foremost scholars of science fiction history in the US, and his Library of America collection, American Science Fiction: Nine Classic Novels of the 1950s is an essential selection from the genre’s past. This month, he’s releasing a new boxed set of books that showcase the fiction of the 1960s, including Poul Anderson’s The High Crusade, Clifford D. Simak’s Way Station, Daniel Keyes’s Flowers for Algernon, Roger Zelazny’s … And Call Me Conrad, R.A. Lafferty’s Past Master, Joanna Russ’s Picnic on Paradise, Samuel R. Delany’s Nova, and Jack Vance’s Emphyrio.