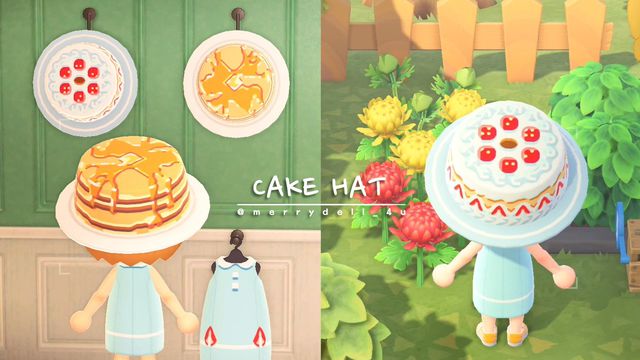 Hats are a good place for sugary delights

Animal Crossing has always offered players consumable food items, like coffee, but Animal Crossing: New Horizons fans are taking things to the next level. By using custom patterns, many island residents are recreating delectable snacks on clothes and hats — and the results are mouthwatering.

Good thing, too: After the horror-themed rooms and the now communitywide obsession with tarantulas, I could use something cute like this.

The most common trend sees folks turning hats into pastries and desserts, typically cakes, but not always. Basically, if the food is circular, it’s fair game — and there are a lot of meals that fit the bill. Best of all, some players, like Twitter user @merrydeli_4u (whose creations are featured at the top of this post), are even sharing tutorials to help others make these accessories, too. Or, if you’d prefer to save some time, there are also plenty of codes to import into your games.

LRT: My burger hat!!! (I worked on it some more after @datclassyrachel and I took those pictures) #AnimalCrossing #ACNH #NintendoSwitch pic.twitter.com/inMHMMRHQI

I created a salmon maki hat yesterday night when I should have been sleeping lmao #AnimalCrossing #ACNH #NintendoSwitch pic.twitter.com/OB4wXx6rsn

I did it! I made a Durr hat! #AnimalCrossing #ACNH #Fortnite pic.twitter.com/scCXbzSuhq

Some are even going one step further and arranging entire food-themed outfits and dresses to go along with their hats, as you can see below.

The versions with the Design Code #AnimalCrossing #ACNH #ACNHDesign pic.twitter.com/1dyJWyJs2P

I saw so many cute food-themed dresses so I made a ‘chocolate dipped strawberry’ one! #AnimalCrossing #ACNH #AnimalCrossingDesign pic.twitter.com/xtY6X1oGB4

My Design (by myself lol) no. 01 in #AnimalCrossing #ACNH
Pudding Dress pic.twitter.com/eK5dyIbdnF

But my favorite edible renditions thus far have to be folks putting soups on their heads.