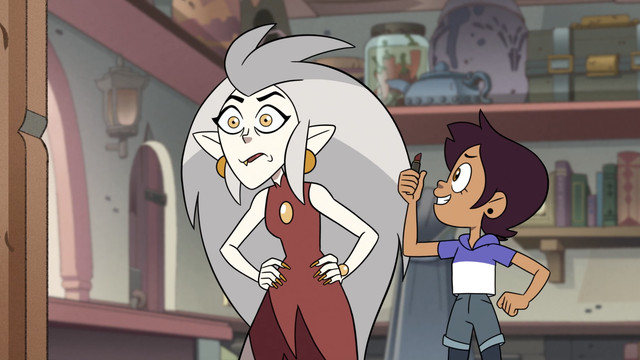 The world of Disney Channel’s animated series The Owl House is getting a bit bigger. Five clips — all designed to dive deeper into the series’ funky demonic world — will premiere on Disney Channel, the platform’s YouTube channel, and in the DisneyNOW app every Saturday from April 4. The first of these clips has plucky human protagonist Luz (Sarah Nicole-Robles) touting her drawing skills, then realizing she accidentally drew something with a cursed brush.

The Owl House, from Gravity Falls alum Dana Terrace, premiered in January on Disney Channel. It follows misfit preteen Luz, who winds up in a world of demons and witches. Determined to live out the arc of her favorite YA fantasy series, Luz sets her sights on becoming a witch under the tutelage of wacky Eda the Owl Lady (Wendie Mackie). The problem? Luz is human, so she can’t practice magic the same way that witches can — but she’s bent on finding a way around that.

The world of the Boiling Isles is visually inspired by Hieronymus Bosch paintings, and it’s cartoonishly macabre. The series contains some truly terrifying moments, like a demonically mutated children’s-book character coming to life and trying to sew Luz into the pages of his book so he can keep his friends around forever. But it always balances the spooks with heart and humor. It’s particularly notable for the way it plays around with typical fantasy tropes — Luz, an avid fantasy reader, expects things to go the way they do in her favorite book. She’s genre-savvy in a way that usually aids protagonists. But attending magic school and setting off on quests don’t go the way she thinks they will.

Much like Gravity Falls, The Owl House is primarily episodic, with an overarching plot weaved in throughout. Most episodes show a new day in the weird demonic world — Luz has a sleepover to do a moonlight conjuring! The gang trades bodies! — but as the season progresses, more is revealed about Eda’s run from the law, and a curse that she’s hiding from Luz.