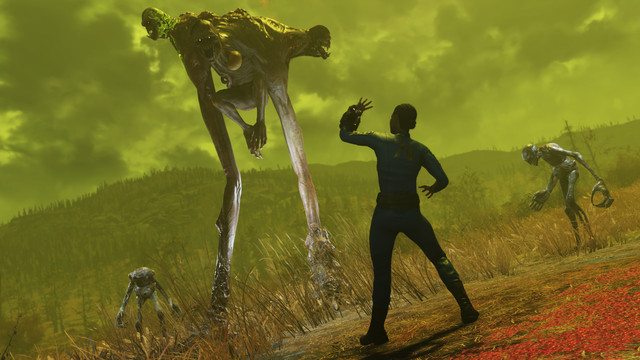 Plus a look at old-fashioned NPC mission-giving

Fallout 76’s long-awaited, return-of-the-NPCs Wastelanders update arrives on April 14. Bethesda Game Studios tossed up a trailer hinting at the narrative supporting such a huge change in the game, with scenes of some of the new activities players will find this coming Tuesday. Developers followed that up with more detail in a blog post on Friday.

For one thing, Wastelanders will add another currency, gold bullion; it’s legal tender with NPC vendors who sell plans that craft new weapons and armor. Those will come in handy, as there’s a new monster out in Appalachia: the Wendigo Colossus. As if a vanilla Wendigo wasn’t tough enough, this one features three heads and can summon its more regular colleagues and ramp up your fight’s difficulty commensurately. Here’s a brief look at such a throwdown.

We’ve already seen snippets of how dialogue and interactions with NPCs will work (your player character is mute again, no surprise there). But this walkthrough of a daily quest, to earn some rep with the Raiders, gives a more detailed look at the return of classic Fallout mission-giving.

BGS developers advise that, with the changes coming in Wastelanders, some areas will be off limits to CAMP sites. They marked these locales on a map in Friday’s blog post; players in those areas might want to move their joint before the update launches on Tuesday. If they don’t, the game will pick it up for them, and give them a free move to put it down somewhere else.

The Wastelanders expansion is free for anyone with a copy of the game; it’s available on PlayStation 4, Windows PC, and Xbox One. April 14 is also the day when Fallout 76 comes to Steam; those who already have a PC version of the game will get a free copy of it there, provided they link their accounts by 11:59 p.m. EDT on Sunday, April 12.