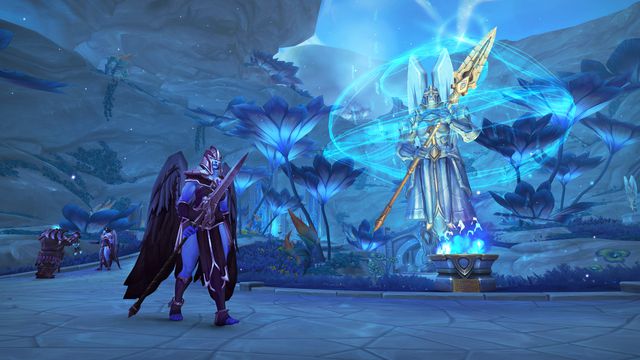 What does capital-H Heaven look like in World of Warcraft?

In the next World of Warcraft expansion, Shadowlands, players are going to make the perilous trek through Azeroth’s realm of death. In the Legion and Battle for Azeroth expansions, players could head to any one of several leveling zones in any order they preferred. But in Shadowlands, the trip through this dreadful land is much more directed.

Players will start their journey in a zone called Bastion following a brief adventure through the Maw, the “mega hell” of World of Warcraft’s afterlife and Shadowland’s central mystery. We spoke to World of Warcraft lead narrative designer Steve Danuser and senior game designer Johnny Cash about the creation of Bastion, and what players can expect inside its heavenly gates.

A traditional take on heaven

Bastion is the zone that looks the most like traditional, capital-H Heaven. The whole point of Shadowlands is that there isn’t just one afterlife; every afterlife for every culture and people on Azeroth is both real and co-existing with other heavens and hells. Bastion is just one of them.

“We felt like starting off in a place that exemplified the more idyllic or traditional, ‘ah, here’s a place I can get into and feel like I can exhale’,” says Danuser. “There’s something noble and pure about this kind of afterlife.”

We’ve seen some hints of a Bastion-like world before in Legion, through the Titan keeper lore. “When Odyn pierced through the veil and looked into the Shadowlands, and based the Val’kyr off the creatures he saw … what did he see?” said Cash.

The answer is the Kyrian, a noble and majestic group of protectors and servants.

Of course, it’s a World of Warcraft zone, so things have gone wrong, and the player has to step in. In Bastion, unintended souls are going to the Maw, which means that the Kyrian don’t have any Anima, their essential soul juice. Their society is grinding to a halt, and their once perfect set of rules simply do not work anymore.

Things aren’t quite as wonderful as they seem on the surface. One quest has the player help a Tauren pass their trials; once he does, the Tauren transforms into a Kyrian himself. Why help a cool Tauren become a blue human? Isn’t that a betrayal of his fundamental nature?

Blizzard wants players to think about these things, according to Danuser. The team wanted the Kyrian to come across as fallible and in need of a new perspective. They’re certainly not evil, but they are set in their ways. Players are the tool to come in and change this society. If players pledge to the Kyrian covenant, they’ll get to be a major part of that change (while also unlocking new abilities).

When it comes to scale, and the time spent in a zone, Shadowlands can’t quite compare to its predecessors in Legion and Battle for Azeroth. Blizzard built Shadowlands with a different philosophy in mind. Leveling in Bastion is just one part of the zone, with the player returning later to see the area from different angles — a trick Blizzard has used in the past.

“We’ve spent a lot of effort to make sure there are areas [in zones] that are reserved for max-level content. That was something we thought was really cool from the older expansions, like Kazzak’s area in Hellfire Peninsula,” says Cash. “It’s cool to have scary parts of the world that players aspire and build towards.”

It’s an approach that requires a different way of leveling and experiencing the expansion’s story. Danuser admits that Battle for Azeroth was ambitious, and juggled a few too many threads. Shadowlands is more focused; it’s a “linear, very structured narrative arc” that focuses on one main story.

There’s also room for Blizzard to introduce new plot threads from, well, anywhere. Everyone who dies in the World of Warcraft universe goes to the Shadowlands — even creatures from planets and zones we haven’t seen or heard about yet.

“Now the trick is, obviously, we don’t have character models for the 18-legged arthropods of Praxis-9,” jokes Danuser. But these souls will still show up as amorphous blobs in zones like Bastion, leading to an endless potential field of future possibilities hidden in an already otherworldly, mysterious zone.